Healthcare has come a long way, but there’s always room for improvement

Modern healthcare has provided significant benefits for society – pre-antibiotics, a simple scratch could lead to serious infection and death. Infant mortality has decreased across the OECD from 22 in 1000 births to 3 in 1000 births. That’s a massive 86% decrease, and the 70s aren’t that long ago – think of the bands formed then such as AC/DC, Aerosmith, Led Zeppelin, Pink Floyd, and Bob Marley – some still play arenas today! 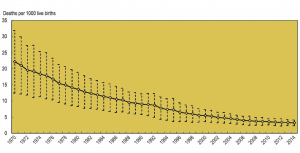 As the demand for healthcare increases, so does the number of healthcare visits annually, causing significant problems. On a national level, Adverse drug events (ADEs) are the fourth leading cause of death in the United States. This year, over 2 million serious ADE’s will occur in hospitals in the US alone (Committee on Quality of Health Care, 2000), costing an estimated $177 billion USD (Ernst FR, 2001) – more than the total cost of cardiovascular or diabetic care across the USA.

At an individual level, it’s more concerning. In 2008, the US Department of Health and Human Services (HHS) estimated that approximately 1 in every 20 (5%) hospitalized Medicare patients experienced permanent harm from a medication error (Levinson DR, 2010). Other hospitals report similar rates of adverse drug responses (Classen DC, 1997).

The good news is most ADE’s can be prevented. Studies report that more than 75% of ADE’s are dose-dependent (Lazarou J, 1998) and can be prevented with better dosing (Joint Task Force on Practice Parameters, 1999).

However, these statistics do not include the impact of sub-therapeutic dosing – where the dose that is given is safe yet ineffective. Studies vary, but show that sub-therapeutic dosing is common. Our internal data suggests that before implementing DoseMeRx, hospitals average a rate of between 1 in 2 and 1 in 4 doses being sub-therapeutic, which concurs with figures reported in the scientific literature (Bakke V, 2017).

It’s important that we recognize, however, just how high our expectations (quite rightfully) are. Choosing the correct dose of a drug for an individual is challenging because there is no average – patients’ response to drug therapy is diverse. Some of this diversity is observable, such as sex, body weight, age. Other ‘known’ differences might not be easily measured, but can still be quantified, such as our genomes.

The vast majority of variability in an individual’s response to pharmacological therapy is not observable – in other words, it’s “unknown” – and this is responsible for up to 60% of all variation in patients’ response to a dose. This unknown and (previously) unpredictable variation drives both supra- and sub-therapeutic dosing. It’s this ‘unknown’ variability where DoseMeRx comes into play.

DoseMeRx uses existing patient information to build a model of each individual patient to help clinicians measure the total amount of this ‘unknown’ variability. Once this model is built, a clinician can quickly calculate precise dosages to reach a drugs therapeutic range. This eliminates the traditional, and more experimental, trial and error methods of slowly adjusting the dose up and down. While DoseMeRx will learn over time, it uses the available information from pathology tests to measure the total amount of variation – and thereby calculates a much more precise dose.

The motivation behind founding DoseMe is pretty simple – there is huge opportunity to improve patient care, and we want to improve it.

What’s your next step to improving healthcare?

Robert McLeay is the Founder and Chief Scientific Officer at DoseMe. At DoseMe, he combines his love of modeling biological data with his background in IT to provide safer, and more effective precision dosing to patients via easy-to-use software designed for physicians rather than researchers.

Originally trained in software development, Robert had a range of roles leading software development teams. Robert then returned to university to complete a PhD in Bioinformatics, using computational techniques to model and understand genetic and biological data. Robert has applied modeling and bioinformatics to a range of fields, and is published in areas including genomic data analysis, developmental biology, glioblastoma, and schizophrenia research.

Robert holds a Bachelor of Information Technology, Bachelor of Science, and a PhD (Bioinformatics) from The University of Queensland.